We’ve all experienced that magical feeling of being hit with ‘a brainwave’. That moment of newfound clarity, shift in perspective or a novel idea. And typically, it seems to appear out of nowhere. In between sips of coffee, while out for a walk, or simply indulging your dog in a good belly rub.

While “a brainwave” can be a figure of speech to describe our thoughts, scientists and clinicians can use literal brainwaves, measured on the head, to help understand the functioning of the human brain.  As it turns out, the key to having more of these ‘aha’ moments lies in understanding the science behind brainwaves. Neuroscientists have been studying brainwaves – the popular name for the field of electroencephalography – for nearly a century.

The brain has billions of neurons, and each individual neuron connects (on average) to thousands of others. Communication happens between them through small electrical currents that travel along the neurons and throughout enormous networks of brain circuits. When all these neurons are activated they produce electrical pulses – visualize a wave rippling through the crowd at a sports arena –  this synchronized electrical activity results in a “brainwave”.

When many neurons interact in this way at the same time, this activity is strong enough to be detected even outside the brain. By placing electrodes on the scalp, this activity can be amplified, analyzed, and visualized. This is electroencephalography, or EEG – a fancy word that just means electric brain graph. (Encephalon, the brain, is derived from the ancient Greek “enképhalos,” meaning within the head.)

One way that EEG ‘brainwaves’ convey information is in their rate of repetition. Some oscillations, measured on the scalp, occur at more than 30 cycles per second (and up to 100 cycles per second!) These cycles, also called frequencies, are measured as Hz, or hertz, after the scientist who proved the existence of electromagnetic waves.

When looked at this way, brainwaves come in five flavours, each of which corresponds to a Greek letter. As we’ll see, these different brainwaves correspond to different states of thought or experience. While there are many other ways to analyze brainwaves, many practitioners of a field called neurofeedback rely on dividing brain oscillations into these five categories.

Some of these brain oscillations are more easily detectable on specific parts of the scalp, corresponding to the parts of the brain just below. The brain has many specialized regions which correspond to different processes, thoughts, and sensations. Particular oscillations often reflect distinct regions and networks in the brain communicating with each other. 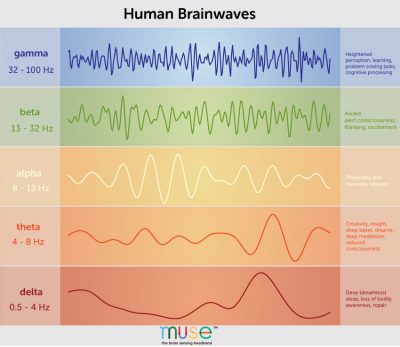 The 5 main types of brainwave frequencies

Different patterns of brainwaves can be recognized by their amplitudes and frequencies. Brainwaves can then be categorized based on their level of activity or frequency. It’s important to remember, though, that brainwaves are not the source or the cause of brain states, or of our experiences of our own minds – they’re just some of the detectable reflections of the complex processes in the brain that produce our experience of being, thinking, and perceiving.

Below are five often-described brainwaves, from fastest activity levels to slowest.

Gamma brainwaves are the fastest measurable EEG brainwaves, and have been equated to ‘heightened perception’, or a ‘peak mental state’ when there is simultaneous processing of information from different parts of the brain. Gamma brainwaves have been observed to be much stronger and more regularly observed in very long-term meditators including Buddhist Monks.

Alpha brainwaves are some of the most easily observed and were the first to be discovered. They become detectable when the eyes are closed and the mind is relaxed.  They can also often be found during activities such as:

According to Professor Jim Lagopoulos of Sydney University, “previous studies have shown that theta waves indicate deep relaxation and occur more frequently in highly experienced meditation practitioners.  The source is probably frontal parts of the brain, which are associated with monitoring of other mental processes.”

Most frequently, theta brainwaves are strongly detectable when we’re dreaming in our sleep (think, the movie Inception), but they can also be seen  during :

When we’re doing a task that is so automatic that the mind can disengage from it e.g. brushing teeth, showering. Research has also shown a positive association of theta waves with memory, creativity and psychological well-being.

These are the slowest of all brainwaves, and are strongest when we are enjoying restorative sleep in a dreamless state. This is also the state where healing and rejuvenation are stimulated, which is why it’s so crucial to get enough sleep each night.